So I’m 30. I guess it’s no big secret, but I feel like such a scandalous southern woman admitting this so freely. Mary Kay Ash, founder of Mary Kay cosmetics (whom I very much respect) once said, “I never tell my age. Why should I? I believe that a woman who will tell her age, will tell anything.” So I used to live by this and many other southern charm school traditions in an attempt, I guess, to connect to my roots–to have things with which to align myself–but now I’m starting to think why? All the attempts we make to add to our identity are actually just stoking our egos, and that’s not necessary or productive. I have been striving to slowly strip away these labels! And furthermore, what is really the problem with “telling anything”? I am writing this blog after all, and feel that I am pretty much an open book. (Also we all live now in this age of social media where we share much more than ever before with more people than ever before.) How are we ever going to start real communication and evolve, and help each other until we start talking? For example, recently (now that everyone is talking about the Lilly Ledbetter Fair Pay Act) the I listened to a segment on NPR salaries. In most companies it is actually against policy to reveal your salary to other co-workers, but there some companies out there that put all that info right out in the open. Yes, it may be an adjustment as co-workers learn how to work well together knowing the salary that they each earn, but there can be many benefits, such as truly making what you are worth and seeing that you are not discriminated against for any reason, and also holding each other accountable to fulfill your duties and earn the salary that everyone knows you earn. This is just an example of how things could evolve and get better when we starting talking!

Which brings me back to aging (more of this in a blog to come). Why can’t we all chat about the aging process so we can start to accept it? It is no big secret that we are all aging and that our bodies are going to change as it happens. Why don’t we all talk about things like dying hair to cover gray instead of everyone just pretending that gray hair no longer exists? It’s weird, right? I digress. Back to my two week Birthday Extravaganza! Readers are always asking for more about NY adventures etc, so here we go.

I decided to celebrate with Arkansas friends first and then celebrate my actual birthday in NYC. A lovely group of ladies and I ended up across the river in Memphis, TN on a Friday night doing yoga on top of The Peabody Hotel followed by dinner and drinks at restaurant called The Majestic Grille on Main Street, near Beale. We noticed–as we got in the PORSCHE my Pilates client let me drive (have I mentioned that I have the best clients in the world?) –that although many others had good intentions of joining us for the evening, it was only the ones without kids that ended up going. Just an interesting observation that we all laughed about.

I found out last minute about Lululemon’s free rooftop yoga class and decided it was not to be missed! We enjoyed the amazing view atop the iconic hotel and flowed through asanas as the sun was setting. There was a DJ and a little bit of trace dancing before we ended in a long savasana as darkness fell. There were over a hundred yogis there and it such an amazing feeling to share a practice with them all as we turned the Peabody rooftop into our sacred place.

My Birthday’s of the past several years have consisted of low key get togethers with friends over food, maybe some games, but for whatever reason, this year I wanted to go out! I was ready to dress up and hit the town and wine and dine and dance. So after the amazing yoga session, we transformed ourselves in the bathroom and headed to dinner. I didn’t overdo it–just one delicious cocktail, and my favorite salad–a Waldorf.

I so enjoyed the company of the classy smart ladies who accompanied me. We drove into great conversation ranging from yoga, to gay rights, to school and science and cooking and many other things in between. It was such a relief to talk because sometimes. Especially with the state of politics right now and being in Arkansas and in my line of work, I find myself not fully able to throw all my opinions out there and have any healthy heated debates! Then a free desert smorgasbord happened fulfilling my dream of Tiramisu and providing a shot glass of desert for everyone! Then we walked around downtown and hopped back in the dreamy Porsche to head home. Thus beginning my late night escapades.

A few days later, it was time to pack up and head back to the big apple. It was a welcomed sight, complete with great friends and perfect summer turning into fall weather. And it was time for more celebrating. Let me preface this portion with, I don’t really drink and stay out until three in the morning anymore, but I guess it was time to start! After an audition for Maggie in Cat on a Hot Tin Roof (which I am born to play by the by), I spontaneously spent all day with my best friend, who had already insisted that he be with me when the clock strikes midnight on my birthday. (Despite the fact that I was actually born at 1:36 PM). He walked me to my present which was having a street artist, who sits most days outside of MoMA paint my portrait. It was incredible. Who has sat for a portrait these days? I was there for an hour as he painted layer upon layer of color onto a 9 x 9″ square of paper. Kyle wanted me to have painting, capturing the last day of my twenties. (I actually have a pencil portrait of me when I was 16, so it seems that I do this every 15 years or so!) His portraits all had an air of morose about them, so I tried to look up and give the slightest smile but it still came out as it did–honest, beautiful, tragic. Next time you’re in the city I highly recommend visiting MoMa and the artist Mark R. Nilsson at his portable studio on the street. You’ll walk away capturing a moment in time, owning a lovely piece of art, and supporting a true artist. 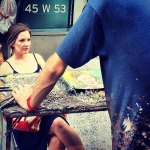 After the painting I run errands all over the city while Kyle stars in Wicked on Broadway. Then we meet up for late night dinner and drinks. Kyle enjoyed telling everyone–friend or stranger–that it was my 30th birthday, which resulted in way to many free drinks. I don’t know how I survived three different locations where I consumed a martini, a margarita, a tequila shot, a beer and a Yeager bomb. I mean, this is not college or something and I am so not a drinker and am generally super healthy. I can’t believe I survived the night but I did, and Kyle was with me as the clock struck midnight…and for the following three hours.

Then it was my official “going out in NY for my birthday” night. Birthdays in NY are generally so expensive and most of my friends are on very tight budgets, so it’s always a toss up as to who will end up going out with you and there is no hard feelings for those who can’t make it. I ended up with a table full of wonderful friends, dining at Spring Street Natural. The restaurant was in NoLita in Soho–so that’s south of Houston and North of Little Italy, if you are confused. For dinner I had seitan with asparagus and lentils and a delicious and freshly squeezed blood orange cosmopolitan. YUM!

I have to brag now, that I found a cute dress in Springfield, MO during the summer that caught my eye and imagined myself wearing it for my birthday in NY, but I didn’t allow myself to buy it. Then over the following weeks, I was able to put together my own version of it with things I already had a home. Check it out:

My mom hemmed a plain strapless white tube dress I had a home and I paired it with this crazy black ruffly shoulder wrap I NEVER get to wear. I added gold bracelet and black lace platform heels and I was all set. Not bad for not spending ANY money, right?

So then we were off to do some dancing. I bought a Time Out New York magazine in an attempt to figure out what club would be cool on a Wednesday night. I settled on The Delancy which was within walking distance of the restaurant. I called ahead so when we got there, we all got to sit in a fancy velvet booth in front of the stage. So I went there because I felt like dancing and I did not want to go to a pretentious straight club in midtown with a $20 cover and wait in a line outside the door forever. And dance we did. We had a blast as they played music from every decade. Dancing with a bunch of Musical Theater people is just the best. 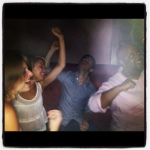 So in between the bouts of dancing, there was a…burlesque show. Hysterical that this is what was happening for my birthday! We laughed and were thoroughly entertained both by very talented performance and very dreadful ones. Every time boobs came out, I’d turn to my friend (half of them gay) and say “you’re welcome!” It was crazy and perfect.

I got home at 3am for the second night in a row. It took me a week to fully recover. But, hey, you only turn 3o once, right? At least in this lifetime. Now I’m left to ponder this crazy thing called life and how it’s possible I’ve been on this earth for three decades. All I can say is that, somehow, things are exactly as they should be and these three decades have been the wildest, most amazing adventure I could ever have imagined. I am infinitely blessed and wouldn’t change a thing. What about you?